Tokyo is a modern city.  Everywhere you look there are neon lights and tall buildings.  When I first came here I was excited by it and also disappointed.  I was excited because, well, it’s exciting to be in the hustle and bustle of this mega metropolis.  I was disappointed because I wanted to see more of traditional Japan.  Sure there are shrines all over the city that have the feeling of ancient times but, to me those places were only a small glimpse of the grandeur I was missing.  Kyoto, of course, is famous for being a place that maintains the beauty of thetraditional Japanese esthetic but it is too much of a hassle to get on a bullet train and go all the way to Kansai just to feel the nostalgia of Japanese culture.  I needed something closer.  Later I discovered that the closest place to Tokyo to get that Japanese feeling is Kamakura.

Kamakura is located in Kanagawa prefecture just 50 kilometers from Tokyo.   It is a wonderful place to go on an adventure.  Getting there is easy.  It is just a straight ride from Tokyo Station or Shingawa Station on the Yokosuka line.  If you are coming from Shibuya or Ebisu then the Shonan Shinjuku line will ferry you there as well.  From any of these stations it will take just under an hour to getto Kamakura.  Once you arrive you will find that there are tons of great places to eat Japanese and Western foods as well as many sightseeing locations to visit.  I won’t talk about food today.  I will point you in the right sightseeing direction by introducing two must-see locations; the bamboo grove of Hokokuji and the famous Great Buddha.

Hokokuji is a Zen temple that’s located 1,700 meters east of Kamakura station.  It was founded in 1334.  Although the beautiful wooden structure is something worth seeing, the thing that really makes it special is the bamboo grove.  It is a tranquil and almost magical place that has a deep sense of spiritual energy.  You don’t have to be a new age aficionado to appreciate the beauty and the power of the garden.  From the moment you step inside you will feel it’s quiet energy wash over you and re-energize you.  For 500 yen you can have a cup of rich green tea and some Japanese sweets while you sit and meditate on life.

Another must-see is the bronze statue of Amida Buddha.  To get there you must take the quaint Enoden train a few stops and get off at Hase.  Locally the statue is known as the great Buddha or the Daibutsu.  It sits on the grounds of Kotokuin Temple and, at 13.35 meters, it is the second tallest bronze Buddha statue in Japan. The Daibutsu dates back to 1252 and has had a rich and tumultuous history.  The statue was once housed indoors but several times the surrounding building was destroyed by heavy typhoons.  Since 1498 the statue has remained outdoors leaving it to battle the elements and vandals.  At the entrance to the grounds there is a sign that reads. "Stranger, whosoever thou art and whatsoever be thy creed, when thou enterest this sanctuary remember thou treadest upon ground hallowed by the worship of ages. This is the Temple of Buddha and the gate of the eternal, and should therefore be entered with reverence.”
I think that message can apply to all of Kamakura.
Photos by Marcellus Nealy 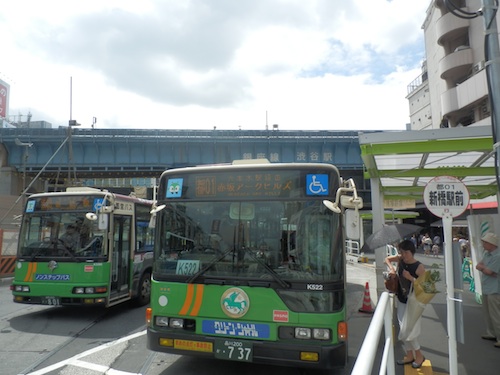 It is possible to live in Tokyo and rely completely on the train system and taxis to get around. This is especially true if you live and work within walking distance from the nearest train station, and all of your daily living and shopping needs can be met in between. As such buses are often overlooked as an easy means to make moving about more convenient. Still, however, as the announcements and signage are mostly in Japanese, the experience can be stressful unless you are tagging along with someone who knows the ropes and can show you the way.

Bus services in the Tokyo area are abundant and reach places by road that are often inconvenient by train. As with trains and even taxis, PASMO and other cards can be used for payment, by simply pressing it against the designated spot as you board, or otherwise a machine by the driver will accept cash and can exchange \100 and \500 coins and \1,000 notes. As you board, if you are uncertain if you’re getting on the right bus, simply ask the driver if the bus stops where you want. When your stop is announced, which, these days is usually by a polite recording, press the button located on a handrail to signify the driver to stop. In most all cases the driver will remember and make an announcement to assure you.

Costs and systems may vary depending on the bus company, but usually payment is in advance, and there may either be a flat fair or distance-based fair. Bus companies also have discount systems including passes, multiple tickets, prepaid cards, and a discount service for the elderly. Fair for children under 12 years old is usually half while children under six are free if accompanied by an adult (the first child is free, additional children are charged).

When arriving to Japan by Narita or Haneda international airports, the Airport Limousine Bus is for many people the best and most practical way to get to their hotel or a convenient location in central Tokyo. The familiar orange and white buses have been an endearing welcome home to residents since the 1950s. Although travel times can vary, unlike the trains, the Airport Limousine bus is fairly reliable excepting extreme traffic conditions. Costs, timetables and other useful information about the service are available in English on the company’s website.


People from all over Japan and indeed the world take the Hato Bus Sightseeing Tours, which feature time-honored visits to the great shrines, temples and Japanese gardens of Tokyo. Hato Bus tours combine a variety of memorable activities, including stops for traditional Japanese foods, shopping excursions, and cruises in picturesque areas. Tours are available in English and Chinese. 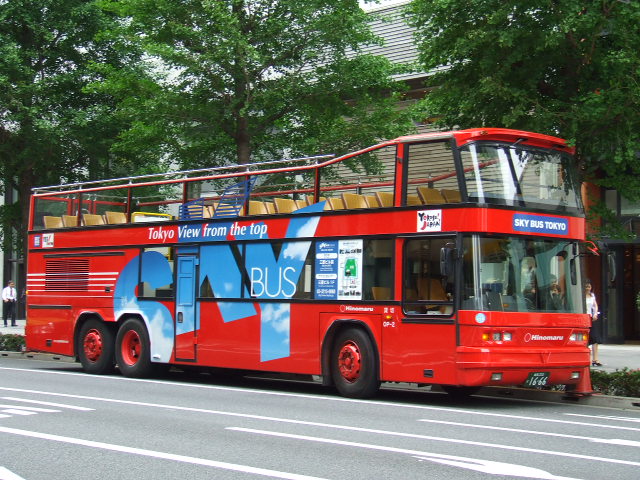 Skybus Tokyo Tour is a double-decker, open-top bus that let's you see a lot of the city in about an hour. Especially in nice weather, the seemingly endless spectacle of architectural achievements (and failures) great and small alone is worth the price of the ticket. The driver maneuvers the outsized vehicle beneath low-lying signage through tiny backstreets and down major highways to all of the major landmarks including the Imperial palace, the infamous Ginza district, Rainbow Bridge and Odaiba, Tokyo Tower and Tokyo Skytree (the world’s tallest tower), Asakusa and more. In December the tour goes to all of the key spots in Tokyo decked in spectacular Christmas lighting.


If you're in the area near Tokyo Station covering Marunouchi, Otemachi, Yurakucho and Hibiya, you can catch a free ride every 15 minutes on the Marunouchi Shuttle between 10 a.m. and 8 p.m. A 40-minute route makes stops at the Shin Maru Building in front of Tokyo station, the posh new Palace Hotel, the historical landmark MY PLAZA building in front of the Imperial palace, the edge of Hibiya Park and more. Similar services are available in Odaiba (Bay Shuttle) and Nihonbashi (Metro Link Nihombashi). 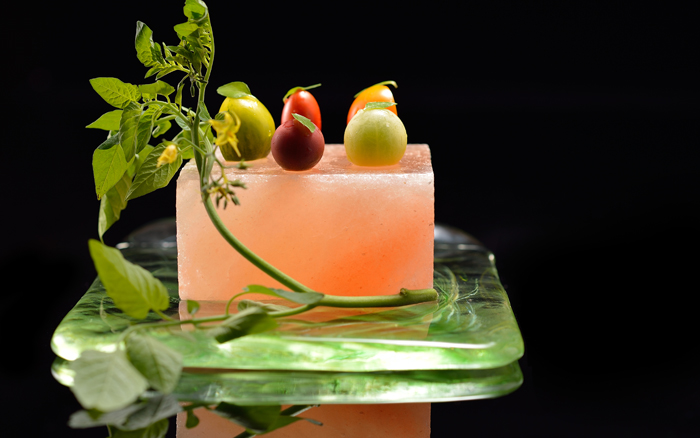 Whether you have come to just visit or you have decided to move here, you will find Tokyo to be one of the most sophisticated cities on the planet.  From the ultra elite to the extremely homey, this city has it all.  If you are willing to go on an adventure I promise you that Tokyo will not disappoint you in the end.  Over the years I have seen a lot of exquisite places in this city. One of the most spectacular and exclusive is a restaurant called Takazawa, which is named after the owner and master chef, Yoshiaki Takazawa.

Chef Takazawa is a food zealot.  He often works 18 to 20 hour days either experimenting and developing new taste or preparing gorgeous meals for his customers.  He is so picky about perfectionism that he only gets 4 to 5 hours of sleep a night.  I was told that even then he is dreaming about food.The results of his tireless efforts are absolutely mind blowing.  Although the minimal price to dine is roughly ￥15,000, you will not find any other place like it on the entire planet.  What you get is more than exquisite food you get to experience the gastronomic world of a true genius.

It seems cooking runs in his family tree.   His parents and cousins from both sides of the family are all culinary artists.  At the age of 18 Chef Takazawa attended a French cooking school where he learned the fine technique of high quality European cooking.  From there he began to become more and more possessed by the desire to understand not just the food itself but the spirit that lives within each ingredient.  What he creates now has been transformed from European into unique compositions, many of which defy classification.  You must go and taste for yourself.

Takazawa is located in Akasaka right on the corner of Akasaka Dori and Sotobori Dori on the second floor of the innocuous looking Sanyo Akasaka Building.  It is very difficult to find.  I suggest you take the address, the phone number and a cell phone GPS, just in case.  They have been at that location since 2005 when the restaurant use to be called Aronia, after the sweet and sour super fruit.   In May of 2012 the name was changed and the number of seats served was increased.

If you decide to go to Takazawa you must make a reservation.  Getting a seat is incredibly difficult.  People travel from other countries hoping to sit at one of his tables.  What makes getting a seat even more difficult is the fact that he only serves ten customers a day.  That, quite possibly, makes Takazawa the most exclusive restaurant in Tokyo.

Everyday Chef Takazawa and his wife buy their ingredients fresh from local markets.  Their shopping is specifically tailored to the menu they will serve each night.  If you make a reservation and cancel within 3 days you will be charged a cancellation fee, which increases as you get closer to the reservation day.  The plus side of cancelling your reservation is that some other lucky soul will get a chance to go.