Physical fitness is an important part of staying healthy.  It is also extremely beneficial for dealing with the stress of everyday life.  In a hectic city like Tokyo good exercise can go a long way towards keeping you sane.  There are all kinds of sports facilities around the city.  Some of them are extremely expensive while others are relatively cheap.  Private gyms, for example, can run you up to 20,000 yen a month in membership fees.  Public gyms, on the other hand, can be as low as 500 yen a day and are pay as you go with no monthly fees.

The problem with private or public gyms is that they are mostly geared toward an all-Japanese clientele.  Of course they are.  This is Japan.  As an expat, however it is sometimes difficult to follow what’s going on.  Even if your Japanese ability is irreproachable it still takes a lot of energy to do things in a second language.  Also the gym is normally set up so that each individual trains alone or one on one with an instructor.  For the most part you are isolated from the other people who are working out unless you get lucky enough to meet a friend who always goes to the gym around the same time you do.

In Tokyo, there is a martial arts school called Shin Kali.  This is the perfect place to get a workout and also find a community.  At Shin Kali they teach the art of stick fighting, self-defense, and physical training.   Lessons are taught in English and Japanese.

I know there are probably many people who are reading this article that may feel it is better to take up karate or Judo since they are, after all, in Japan.  This might be true.  If you are the type of person who finds comfort in doing what everyone else does then Aikido, Judo, Kendo, or Karate are traditional Japanese fighting styles that will not disappoint you.

If you are the type who likes to do things off the beaten path, if you already have martial arts training and would like to expand your capability, or if you are just the curious type then Shin Kali just might be the right thing for you.  Along with self-defense they also teach security training, as well as beginner, intermediate, and advanced levels of fighting.  The classes have both men and women.  They are serious but at the same time the instructors emphasize having a fun and fulfilling experience.  What’s also interesting about Shin Kali is that there is a strong comradery between the students that develops as they train together, go to seminars, and travel abroad for tournaments.

Classes are offered every weekend in Tokyo and Yokohama.  For more information visit their website 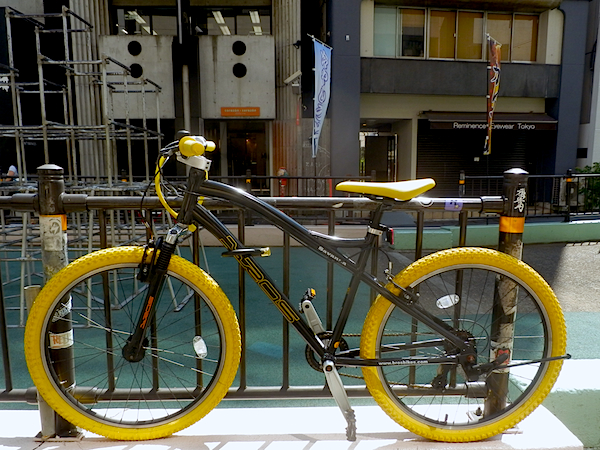 The urban density and visual spectacle that makes Tokyo such a fantastic walking city is greatly intensified by bicycle. Whether for serious touring, or relaxation and exercise, or simply for more convenient shopping, owning a bicycle, or jitensha (自転車), makes much more of the city accessible—up close and personal. Bicycles can be taken on the train for free if disassembled and bagged, which is practical for quick biking excursions to the fringes of the city and beyond. Bike rental by the day and week is readily available and reasonably priced. Numerous international cycling groups exist, which are not only a great way to discover the sights, sounds, smells and tastes of Tokyo, but to meet new friends from all over Japan and the world.

Riding a bicycle anywhere in Japan, however, is not for the faint of heart, and requires that one be “in the moment” at all times to keep from either being run off the road by a wild motorized vehicle or smashing into someone sure to step directly in your path every few meters. It is often simply an exercise in maneuvering around obstacles fixed and moving. And although there appear to be no apparent rules to follow outside the laws of chaos theory, there actually are laws that say bicycles are supposed to use the streets and not the sidewalks, and cyclists can face stiff fines for infractions like riding two to a bike, or carrying two (or more!) children, or riding with lights turned off at night. The laws are for the most part simply ignored and unenforced. Officially, cyclists are required to obey the following rules: 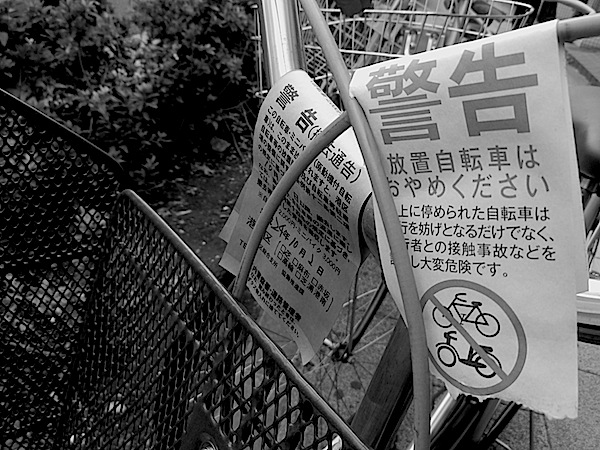 As mentioned above, fines can be quite high. Mothers caught carrying two children can be fined ¥20,000, and riders with lights turned off at night or carrying another person can be fined ¥50,000. In all, however, if one uses common sense, keeps to the left as much as possible (except when people and other bikes force you to pass on the right), rides excruciatingly slow and always yields to pedestrians, there should be no international incidents. Riding while under the influence of alcohol, on the other hand, is a big no-no, and can land you in jail for up to five years with a maximum fine of ¥1 million. And of course, other charges could apply depending on whether any casualties or property damage occur. 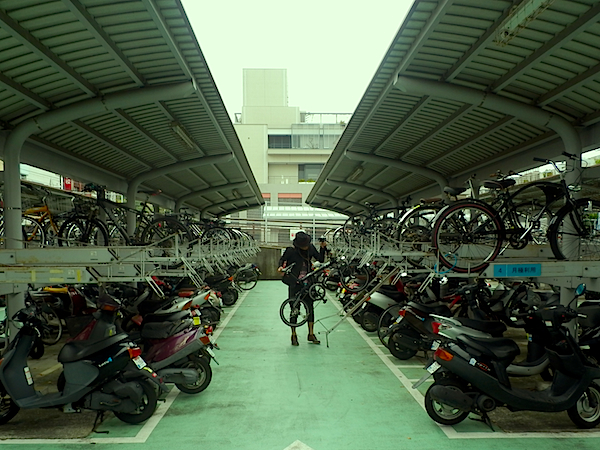 The ardent cyclist will revel in the Tokyo’s numerous upscale shops carrying the finest bicycles on the planet and costing upwards of ¥700,000. The local commuter will appreciate the cheap and ubiquitous “mama chari” bikes with their big baskets for shopping, which can be had for around ¥10,000 or so, or often for free from friends. Whether you buy or receive a bicycle, always make sure to register it immediately, which you can do at the bicycle shop or the local koban (police box) where you live. It will join the 90 million other registered bicycles in the country. Then you’ll have to keep it from getting stolen, as bicycle theft is a rather common occurrence in Japan. Most bicycles are equipped with a basic lock, but you’ll need something more substantial to truly deter theft.

With some 10 million registered bicycles itself, and ever more rigid laws about where to park them, there appears to be a big industry in hauling off illegally parked (and abandoned) bicycles, so it’s always advisable to use the bicycle parking facilities as opposed to chaining it to a post. They are high tech and usually free for the first two hours, and very reasonable considering the sense of security they bring.

Taking a Bike on the Train


Japan Railways luggage policy states that there shall be no charge for bicycles for use in cycling or sporting events if the bicycle is disassembled and placed in a bicycle carrying bag, or if the bicycle is a folding bicycle that has been folded and placed in a bicycle carrying bag. Nylon bike bags, or rinkou bukuro (輪行袋) are available from ¥3,000 and upwards at more good bike stores. On city trains the front and rear carriages often have a little more space, and on the shinkansen the rear of any carriage usually has just enough space behind the rear seats to fit in a bagged bike.

Taboos exist in every society.  Outsiders who are unaware of local taboos could find themselves in a pretty embarrassing situation.  For example, in the US we cross our index and middle fingers as a sign of good luck.  In Vietnam, however, doing this same action at a business meeting or in front of someone’s parents would be mortifying because that gesture symbolizes… umm… lady parts.

So, what should a person who just got off the planeknow about taboos in Japan?  Before I get into it I have to say first that Tokyo and other major cities in Japan are pretty modern.  Most people are quite tolerant when foreigners unknowingly do something that is offensive.  Still, if you find yourself in a situation where you don’t want to accidently upset a boss or a potential fiancé’s parents then take heed of these basic rules. 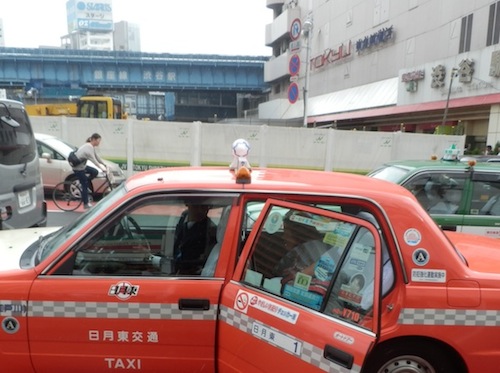 Often the easiest way to get around quickly in central Tokyo is by the ubiquitous taxi, if one avoids rush hours, which tend to turn the streets into parking lots. Step up to the curb, extend your arm at an oncoming cab with a red 空車 (Vacant) sign in the window. A uniformed driver in cap and white gloves will literally screech to a stop and fling open the rear door by remote control.

Taking a cab ride in Japan for the first time is always a fascinating experience. It can often be so for foreign residents, as well. One enters a world that will be either a pleasant few moments of the day or an expensive nightmare depending on the driver’s navigational, driving and communication skills, three things not seemingly necessary to join the profession.

But you can expect the driver to be polite and honest, and if you can’t talk to him (and increasingly, her) in either English or Japanese, and you have the address to where you are going written down in Japanese, you’re unlikely to encounter any frustrations or misunderstandings. What’s more, no haggling and tipping is required as the price on the meter is fully inclusive, so you simply pay the driver what you see and voila, the automatic door releases you into the city.

Satellite navigation systems are being installed in an increasing number of cabs, which makes it even more important to know the exact address of where you’re going. The driver simply types it into the system and off you go. Otherwise, he may spend a few minutes consulting a road map if unfamiliar with your desired destination.

There are many horror stories about the foreign businessman or traveler who arrives at Narita Airport, jumps into a cab and unwittingly racks up an astronomical taxi bill just getting to the hotel. They’re all true. Typical taxi fair from the airport to central Tokyo is about ¥30,000, or some ten times what a train or bus ride would cost. In town, however, if you’re going short distances, or hopping from bar to bar, the cost is worth the convenience, and can even be cheaper than trains or buses if you’re sharing the ride with any companions.

An initial fare of ¥710 covers you for the first two kilometers, then the meter tacks on another ¥80 for every 274 meters travelled. When stuck in traffic, add another ¥80 for every two minutes of being stationary. At night, between the hours of 11 p.m. and 5 a.m., when taxi companies hold mostly a happy monopoly on personal mobility as the trains and buses stop running at 12 and 1 a.m., a 30% surcharge is added to the above. When a taxi’s meter is set at the higher rate, a green light will be displayed in the window. 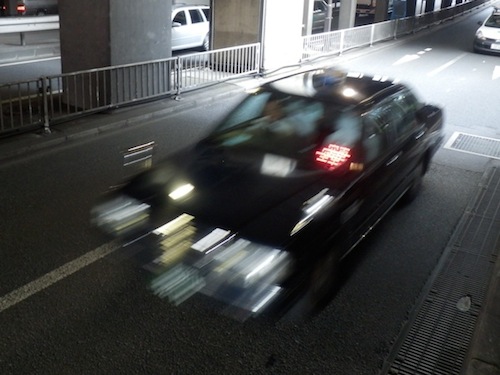 It’s not unusual for disputes to occur between taxi drivers and foreign residents familiar with the roads of Tokyo, who become convinced the driver is padding the payroll by unnecessarily taking the scenic route. Whether true or not, fueled by the stress of being late for a meeting, or alcohol if after hours, such situations can escalate and people even come to blows. The end result is usually the same—a night with the police and stiff penalty for the foreigner, and a taxi driver determined to never stop for a gaijin again.

If a taxi does not stop for you, it’s not always because of some bad experience, and don’t take it personally. Many drivers lack the confidence to deal with foreigners due to language and cultural differences. When one does stop, however, be patient with your driver and take misunderstandings with grace and humor. And always buckle up, as it’s not only the law, but highly advisable considering the manic driving habits of many Tokyo taxi drivers.